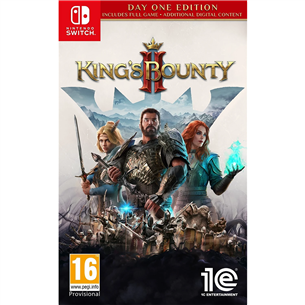 Product code: 4020628692278 Brand: Deep Silver
0% lese for 6 or 12 months when choosing InBank or InCredit
Free delivery in territory of Latvia (e-shop orders only)
Only for orders made in E-shop

King’s Bounty II is the long-awaited sequel to the legendary King’s Bounty video games franchise, one of the most iconic representatives of the turn-based RPG genre. Expanding on this legacy with an entirely new epic story, factions, enemies, and new features to forge an open and breaking fantasy world Antara. With the kingdoms in disarray, counties demanding independence, bandits prowl the roads, all the overseas nations have denied the King’s authority over them, and blighted creatures lie in wait for the unwary, new accidental heroes emerge as last hope.